I really love living in a place with that “small town” feel.  Concord is fabulous when you’re late dropping the kids off at school.  Cabarrus County is wonderful when you’re looking for goods or services and the only “Search Engine” you need is asking someone at the grocery store where they go for X.  Twenty minutes later you have a new friend and a new handyman.

One of the BEST things about Cabarrus County is the sense of community.  Not too long ago I bought a pair of shoes and three days later a man in my Sunday school class told me his brother had sold them to me.  People learn your name in Cabarrus County and they genuinely care about you -- even your shoes.  Isn’t caring the bedrock of community?

Another foundation of this community is faith.  Our original settlers brought their religion and, before the 1700’s ended, Cabarrus County already had Lutheran, Presbyterian, Methodist, and Baptist churches established.  You might say faith built Cabarrus County.

A few years ago my family toured the Dunbrody – a replica of an Irish famine ship.  This thing was tiny, dark, and squalid.  Imagine trying to fit YOUR family - with all your worldly goods  -  into a space the size of dining table… for three months.  (My kids can’t do a two-hour drive without a movie.  True story.) 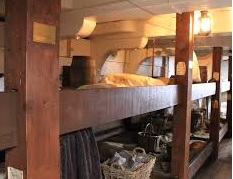 If you survived the crossing you still had to contend with potentially hostile natives, to clear and plant acres of land (by hand), and to construct a shelter.  Then you and your neighbors worked together and built a church. Those early churches developed schools, fostered rebellion, and helped constructa new democratic government.

Jesus fed multitudes with five loaves of bread and two fish.  That’s quite a miracle.  The disciples probably didn’t realize exactly what Jesus had accomplished until it was over.  Just like you may not realize what a miracle each Habitat house really is.

Let me invite you to participate in a miracle.  You.  Your choir, your Sunday school, your church.


In July, Habitat Cabarrus begins construction on the 2015 “Building on Faith” house at 312 Broad Street.  Our goal is to raise $50,000 through donations (financial and in-kind construction materials). In addition 200 volunteers will be needed to put in nearly 1600 hours of construction.  Jesus used a boy’s lunch to feed 5,000 and He can use you to paint, roof, drywall, and landscape to house a family. 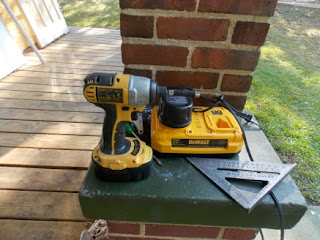 I love being part of a community where people learn your name and where different church congregations work together for the common goal of affordable housing for all.  We all sweat in the Carolina summer sun.  The same Jesus told us, “Love thy neighbour.”  We can do both at a Habitat workday.

We are all invited to build on faith.
Posted by HabitatCabarrus at 6:28 AM No comments:

I never went to a certain railroad-themed park as a kid.  So when we took our kids last year I had HIGH hopes for the outing.  We had a lovely time and the kids were appropriately surprised when the good guys and bad guys battled it out – but it was smaller than I had imagined.  Much smaller.  The reality didn’t match my imagination. 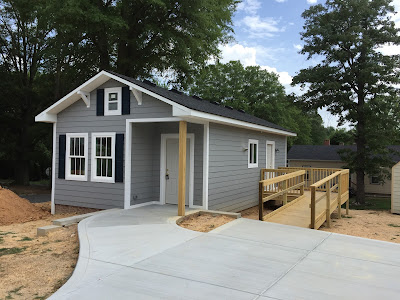 Another time my computer picked up a nasty virus and my husband ended up having to implement the nuclear option.  He wiped it and reinstalled all the software from the ground up.  It took him HOURS to clean up my PC.  I thought for sure he would be angry with me but he wasn’t.  I was so ready for one reaction that was caught pretty flat-footed when it didn’t materialize.  Reality and imagination didn’t align.

Have you ever had that experience – you plan for one thing to the point you can SEE it – and something else happens?

Last night Barbara Gorman was all ready for the dedication ceremony for HER house.  And, well let’s backtrack just a bit. 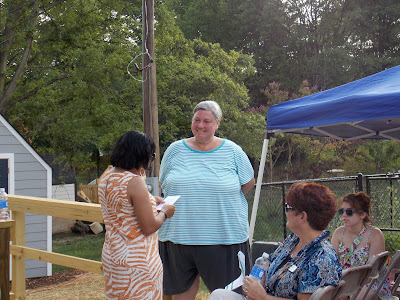 Barbara came to Habitat through a circuitous route.  Her marriage had broken up and it looked like her future was breaking down.  She’d planned for her life to look one way, then it was headed in a whole new direction, and it was not positive.  Her health had deteriorated and with the emotional stress of a divorce combined with the abrupt loss of income Barbara’s prospects were, frankly, dim.

When Barbara approached Habitat for Humanity she didn’t qualify for the housing program.  That moment could have been the end of Barb’s tiny sliver of remaining hope.  But wait.

Our mission says, “Guided by God, Habitat Cabarrus transforms lives and our community by uniting all of Cabarrus County around the cause of decent, affordable housing for everyone.”

That’s what our community did.  We United and we Transformed. 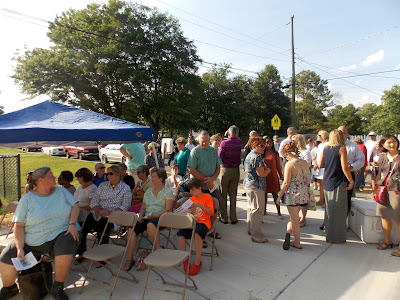 The City of Kannapolis, churches, corporations, colleges, other groups and individuals donated money, materials, and hundreds of hours of labor to build a new type of house (a Tiny House) for Barbara.  There is a whole social movement around Tiny Houses that addresses financial and environmental concerns.

Barbara knows she can afford to LIVE in her house. So she was completely prepared for the dedication ceremony. 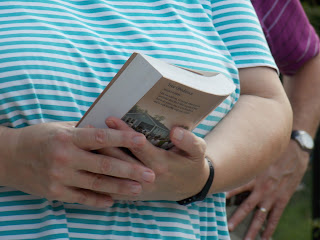 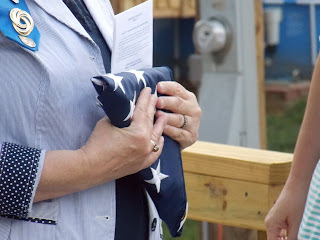 And then it was time for Barbara to say a few words.  She stood up and faced the 60 or so participants with a calm face and a smooth voice.  Then she saw all the love in 60 faces and felt the good wishes flowing HER way.  After saying a heartfelt thank you, Barbara sat down and wept in joy.  (A few more people may have had damp eyes.)

I’m pretty sure Barbara was surprised by those tears.  She had probably practiced her remarks a few times prior to the dedication and felt confident that she knew what to do and what to expect.  Then emotion overwhelmed thought.

Sometimes your reality is just better than what you imagine.

Mary Beth Griffin, Habitat for Humanity of Cabarrus County
Posted by HabitatCabarrus at 3:23 AM 8 comments:

Come meet Alexis Stephens and Christian Parsons of Tiny House Expedition and tour their Tiny House at the Habitat ReStore on Monday, July 13th from 10:30 am - Noon. 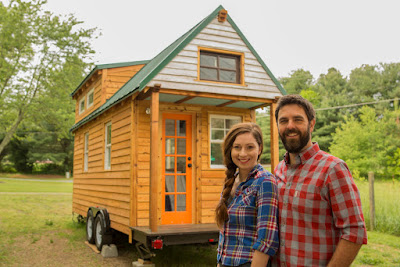 This filmmaker duo and ordinary couple are embarking on an extraordinary expedition across the nation in a tiny house on wheels. Their purpose is to document tiny house community building projects across the nation and tell the story of how each came into being, the people behind them and how they are making a difference in their communities.

They are in town to interview our staff and Tiny House homeowner as well as to document the home dedication. Don't miss this exciting opportunity to be a part of the Tiny House movement! Visit their website or Facebook page for more information and see Cabarrus County featured!


Posted by HabitatCabarrus at 11:37 PM No comments: