There’s a story behind every home and every project that Habitat for Humanity of Cabarrus County undertakes. What starts as a routine initiative for our volunteers and service personnel often turns into a heartwarming feeling of community and comradery.

Christy walked into the Concord Fire Department one morning with one goal in mind: to find a way to make her home safer for her family. Her husband’s struggle with Multiple Sclerosis and her own battle with Epilepsy had already established them as survivors in the face of illness that made life a little more difficult. However, that didn’t inhibit their desire to continue building their family and living their life to its fullest.

Their home, however, was inhibiting their quality of life.

Every day, Christy and her husband lived in fear of what may happen were one of them to fall on the steps outside of their home that were in desperate need of repair. What would seem like a small issue to the average homeowner was presenting a challenge to the couple, and rightly so.

Multiple medical emergencies had been halted or challenging due to EMS personnel being unable or apprehensive in bringing equipment up those stairs. “I knew I needed help,” says Christy, who initially was unsure about asking for assistance. That’s when she reached out to the fire department who directed her to Habitat for Humanity of Cabarrus County.

Resource Development Director Katie Page and Concord Police Chief Ray Allen, both Rotarians in the Concord Rotary Club, took this project to their group and put together a of team of people to help this family. Habitat helped put together the plan and secured materials and Rotarians and the fire department took care of the labor. 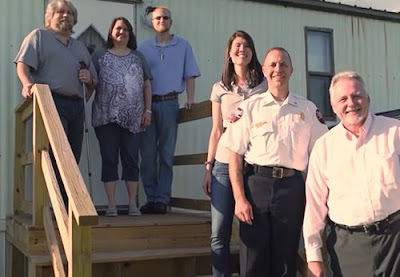 “It was an excellent opportunity for Rotarians to fulfill their obligation to give back to the community in a way that makes an immediate impact on someone’s life,” said Rotarian and Concord Police Chief Ray Allen. From the fire department’s perspective, by helping take care of this problem, they may actually be preventing a need for their service in the future and keep homeowners safe.

Not only did Habitat do the requested repairs making sure the steps were secured and safe, but this team of volunteers also built a covering over a portion of an already existing wheelchair ramp for additional safety.

There were many tears of thanks from the family after the project was completed. With a safer walkway for themselves and guests, Christy feels confident in going about her life as fully as possible--and her idea of reaching out for help has changed as well. “It feels good to know that there are people you can turn to in a time of need,” says Christy, adding, “It has made me look at asking for help in a whole new way.”

In 2015, Habitat Cabarrus helped 35 families with repair projects. If you or someone you know is in need of critical home repairs , visit our website to learn more about how to apply for services at www.habitatcabarrus.org under What We Build/Home Repairs.

Posted by HabitatCabarrus at 5:16 PM No comments:

Look for the Helpers

"When I was a boy and I would see scary things in the news, my mother would say to me, 'Look for the helpers. You will always find people who are helping." — Mister Rogers

I used to LOVE to watch the opening sequence to Mr. Rogers’ Neighborhood. Each episode showed Mr. Rogers walk into his home and get comfy by changing into his sweater and sneakers. Mr. Rogers invited viewers into a personal relationship with him and provided a safe space to discuss life and childhood.  A significant part of the show’s opening included Mr. Rogers singing a song that invited viewers to be his neighbor.

Who or what is a neighbor?  Well that depends somewhat on your definition doesn’t it?  The family who lives across the street from my home in Concord is most definitely my neighbors.  They have a key to my house. We’ve watched pets during vacations, met each other’s kids at the bus stop, leant and borrowed tools and ingredients, traded stories, shared joys, and carpooled to endless school events.

Luke 10: 25-37 is the passage most people refer to as the parable of the Good Samaritan but the question that led to the story was, “Who is my neighbor?”  Jesus answered the question by telling of a man who was set upon by robbers and beaten badly.  Two respected members of society ignored the man’s needs but the third passer-by, a Samaritan, helped.  The Samaritan tended to the man’s immediate wounds, took him to an inn to rest and recuperate, and paid the innkeeper to continue care.

Jesus asked, “Who was the neighbor?” and then told the questioner to, “Go and do likewise.”  The story makes it clear WE are to be active helpers to our fellow man.  Our role of helper is a fluid one because each person’s needs are unique AND because each Samaritan’s abilities are different too. 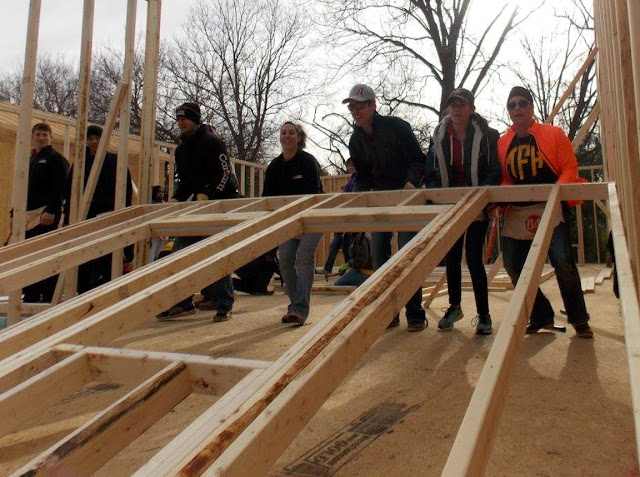 On a cold March morning dozens of volunteers affiliated with the Joey Logano Foundation labored
on Coni Bennett’s future home.  Joey Logano, a very successful NASCAR Sprint Cup Series Driver, worked alongside his enthusiastic team.  Joey hammered nails, raised walls, and teased to keep spirits high.  He and his group were being very good helpers that day.  But like the Samaritan - Joey Logano did more.

Joey asked Site Supervisor Bob (the Builder) LaMarche for more information about Habitat Cabarrus.  Bob mentioned casually that Habitat Cabarrus had outgrown its trailer and that it was becoming unsafe to keep using it.  A few weeks later the Joey Logano Foundation contacted Habitat Cabarrus and asked how to go about replacing that trailer. 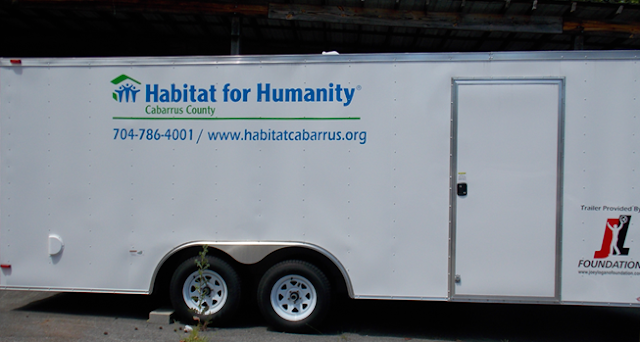 I don’t know if the Joey Logano Foundation understands the positive impact their gift will have on Habitat Cabarrus and our ability to help build community - but it’s terrific.  The Habitat Cabarrus trailer is a mobile construction unit and shifts nails, screws, gloves, hammers, and other building implements to the job site each work day.  It’s a workhorse that performs in heat, cold, sun, and rain for years.

Did you know one box of 16 penny nails weighs 50 pounds?  A single box of 8 penny nails also weighs 50 lbs.  It’s quite common to have several boxes of both nail sizes in the trailer.  One hammer weighs about 20 oz.  If we have 50 hammers out on a typical Saturday that’s over 100 pounds in hammers alone.  We use 20 different types of screws constructing one home - sheet rock, deck, door screws just to name a few.  The boxes are of similar weight as nails.  It takes dozens of rolls of tape to build a single house including window tape, electrical tape, and masking tape.  The weight of all these small essentials adds up quickly.  Then there are the larger tools and materials transported to the construction site as needed…

Sometimes materials (like windows) break or need to be resized.  Previously one of our Weekday Warriors would utilize his personal vehicle to transport trade-out materials to and from the supply store because the old trailer was too small to hold both supplies and large materials.  Now the materials and tools fit in the trailer.  This will not only be safer but will increase efficiency to Habitat Cabarrus construction activities.

If you read this Joey Logano, a few of our Weekday Warriors would like to offer a few specific thank you’s for your foundation’s gift. 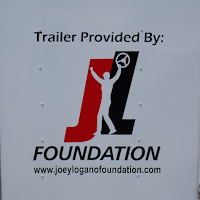 That rolling metal cube is a beautiful blessing to us, the Weekday Warriors and the volunteers who give their time and talents to help our partner families attain home ownership. That trailer is a visible reminder to our partner families that a community of neighbors (including a successful NASCAR Sprint Cup Series Driver) cares about their success.

Thank you to ALL our helpers who give time, talents, and treasures to build families and community.