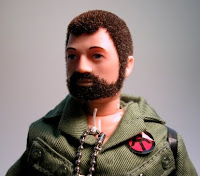 My brother used to have a G.I. Joe as a kid. I had a Barbie. She changed clothes a whole lot but I’m not sure what Barbie DID. Joe, on the other hand, was a man of action. TV commercials about Joe always showed him pursuing really exciting activities like driving the jeep over rocks or parachuting in to save the day. You just knew Joe was rough and tumble and wouldn’t hesitate to jump in to help the other toys.

Dene Dawson reminds me of G.I Joe (and not just because he favors khaki and cargo pants). Dene enters the room like a whirlwind - usually doing three things at once. He juggles the tasks and commitments of his life with the dexterity of a circus performer and keeps a positive attitude throughout. Dene is a man of action, and like Joe, won’t hesitate to jump in and help.

A few years ago while visiting Sweden we experienced multiple food servers who seemed angry to be in a position of service. This contrasted greatly with our time in Japan where service is truly an art. Perhaps the two cultures have very different ideas of what service is... It appears that in Sweden service has an underlying concept of one person having lower status than the other - so service provides an outward and visible sign of inequality. Since Sweden is VERY concerned with fairness this perceived inequality might cause emotional dissonance within the server.

In Japan the concept of service is more akin to “help”. A diner in Mos Burger will receive the same attentive care from staff as a diner in a Michelin-starred establishment. In Japan, the individual builds an underlying sense of accomplishment with each instance of helping another person. So Japanese take pride in serving to their utmost ability.

“But be doers of the word, and not hearers only, deceiving yourselves.”
– James 1:22 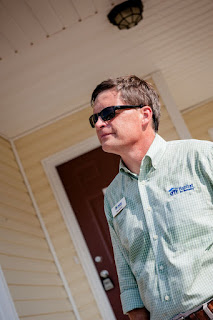 When Dene joined Habitat Cabarrus in 2010 his title was Program Manager. The role encompassed volunteer and family services, land development, and oversight of the construction operations. Habitat Cabarrus was in a state of flux and Dene took on whatever additional responsibilities were needed. (Dene wore MANY – figurative - hats those first few years.)

When asked what he likes about working for Habitat Cabarrus Dene said he never expected it to be so creative. “How we serve families, how we evaluate and take opportunities that come our way has allowed us to take unusual donations of land or buildings and to be creative with them. I’m proud of our transitional housing program and our Tiny House in particular. These programs have allowed us to broaden the way we serve our community.” 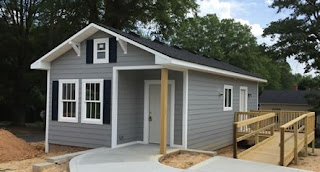 Habitat Cabarrus Executive Director Dave Zablotny stated, “Habitat Cabarrus has been truly blessed to have Dene’s expertise - so it is with both joy and sadness that we congratulate him on his new career move. Dene’s creativity, energy, and experience will be solid assets to his new organization. We will miss Dene as a colleague and as a friend. He will always be part of our Habitat Cabarrus family. We wish him great success in his new role.”

Dene has accepted a position with a national builder that provides him with new professional challenges and will join their organization in September 2016.

Dene shared, “God led me to Habitat for Humanity. I’ve been honored to help achieve affordable housing solutions in Cabarrus County. I am thankful for all Habitat has done for me and now it is time for the next chapter.”

We will miss you Dene. Drive your SUV over new rocks and help build something strong.

Posted by HabitatCabarrus at 9:42 AM No comments:

Each year, masonry students from Jay M. Robinson and Central Cabarrus High Schools come together to lay the foundations for Habitat homes in Cabarrus County. 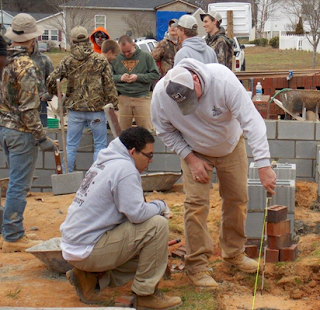 Since partnering with Habitat in 2009, students at these schools have been able to take what they learned in the classroom and experience it first-hand on a Habitat build site.  “The students experience teamwork, build pride, build friendships with another school, and on-the-job training,” says Darren Hartsell, Masonry Teacher at Jay M. Robinson High School.

Not only does this program help high school students develop leadership skills and comradery, it has also taught them about giving back and paying it forward.  “They take pride in being a part of something that helps the community and individuals for life,” says Darren.  “Service learning projects are a Cabarrus County Schools initiative, extending the walls of our classroom and giving back to the community.”

Each foundation gives our volunteers and partner families the starting point they need to build each home.  When the home is complete, it provides a Cabarrus County family with the strength and stability they need to build a better life.

Thanks to the students in Darren’s classes at Jay M. Robinson and Todd Hartsell’s classes at Central Cabarrus High School, we have been able to build numerous homes on the foundations they constructed.  “They love it,” says Darren. “[They] look forward to it every year.” 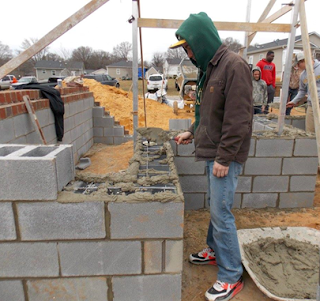 Thank you to Cabarrus County Schools for their partnership with Habitat Cabarrus.  We look forward to working with the masonry students from both schools again this year.

Masonry Teacher Darren Hartsell created a video that shows the progress of laying the foundation for a Habitat home.  Click here to watch it.
Posted by HabitatCabarrus at 12:23 PM No comments: