For Want of a Nail

My Dad says it’s lawn season now that Autumn is knocking at the door…  Last month he aerated, reseeded, and put down wheat straw so that his yard will be green and gorgeous in the Spring. Once he completes the yard work Dad tackles repairs.  Sometimes the porches need work – railings may need replacement or paint touch-ups to prevent wood rot.  Other times the roof needs a few shingles, or windows must be replaced, or walls painted, or… The list goes on.  Twice a year – Spring and Fall – Dad looks over the house making sure that small problems are found and repaired.    Otherwise small problems become big problems. 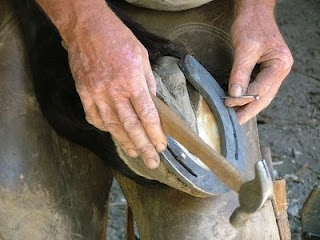 An old proverb says: For want of a nail the shoe was lost.  The proverb lists the cascade effect of the missing nail.  No nail for the horseshoe eventually leads to a battle and kingdom being lost…  all for the want of a horseshoe nail.

Jeweldine and David met like many do – at work.  Jeweldine worked at a local mill and David had a seasonal position during summer break from college.  It was love at first sight.  Jeweldine knew immediately, “He’s the one for me.”  Over time David and Jeweldine married, raised a child, and later raised two grandchildren.  They reared other children through the years because the Steele’s are givers and doers.  Until David got sick.  Until they couldn’t do everything any more.

As the son of a former Concord police sergeant, David Steele is the type of man who knows the importance of the horseshoe nail.  David prefers to stay on top of problems too.  When he worked at Cannon Mills, followed by the hospital in Concord, and finally Barber Scotia College he was the guy who made sure the i’s were dotted and the t’s crossed so issues stayed small.  Then his first heart attack in 2003 changed things.

David had another heart attack a few years later, followed by multiple strokes.  He battled cancer and still contends daily with congestive heart failure.  David relies on two machines to circulate his blood and can barely walk.  His wife of 32 years – Jeweldine – left her work as a hairdresser to look after David.  She says with a smile in her voice, that looking after him is a full-time job.

Twelve years of increased neglect due to David’s health issues led to an unknown big problem.  In 2015 Jeweldine realized they needed help and reached out to Cabarrus County for assistance winterizing their home.  Workers discovered a badly-leaking roof.  The winterizing crew asked Habitat Cabarrus if they could help the Steele family fix the leak.

Habitat Cabarrus went to the Steele’s home and assessed the roof.  Simply fixing the leak was not going to help the problem.  The problem had gotten too big.  The horseshoe nail stage had passed.  The Steele home needed an entire new roof - and roof replacement is neither quick nor inexpensive.  For want of a nail the battle for the roof was nearly lost.

And losing this battle would have far-reaching repercussions for the Steele’s.  If the roof wasn’t repaired, the city could condemn the home.  If their home was condemned, where would the Steele’s live?  They owned their home but were not wealthy, else the roof would have already been taken care of.  Public housing was the likely destination.  Yet how would David and his illnesses and ailments handle the shift?  And frankly, who would physically move the Steele’s from their home of 30 years to a subsidized apartment?  If there was any possible way, the Steele’s needed to stay in their home.

Habitat Cabarrus puts faith into action by helping to build, renovate or preserve homes because affordable housing is a foundation for breaking the cycle of poverty.  As the hymn and lyrics by William Cowper say, “God works in mysterious ways, His wonders to perform.”  Fortunately, (or mysteriously) Habitat Cabarrus had received a special grant earmarked for critical repairs and the Steele’s roof met the criteria.

It took weeks for the roof replacement work to be completed.  Roof replacement required professional roofers.  Randy Goodnight with Goodnight Construction generously agreed to help.  They had other work commitments they needed to meet before they could help Habitat Cabarrus and the Steele family.  In the interim, the ceiling in the main living room sprang a leak so large that the Steele’s had to place a bucket under the leak to catch the water.

Once Goodnight Construction had an opening in their schedule, work began on the Steele’s home.  Jeweldine said the improvement was immediate and quite noticeable upon completion of the roof replacement.  The heat and cool air that had escaped the old roof for years now stayed inside.  Jeweldine gushed, “The house feels wonderful now! The roofers were so nice.  I thank God for them and Habitat Cabarrus every day of my life.”

Romans 8:28 is a good reminder that God causes all things to work together for good to those who love God and to those who are called according to His purpose.  Habitat Cabarrus is honored to serve His purpose and our community through our critical repairs program.

If you would like to learn more about our home repair program please click here or download the Home Repair Application for Assistance and bring it into our offices.

Posted by HabitatCabarrus at 10:00 AM No comments: