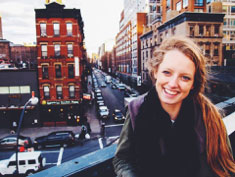 It was spring break and Alida had come home to nurse a few emotional wounds from a bad breakup.  Alida’s aunt knew an inspirational speaker and began to urge her to attend his next engagement.  Her father soon joined in and they eventually were able to convince her to attend an event.  The speaker, Chris Rosati, learned about Alida’s situation and went off script for five minutes and shared how his own experience with a broken heart led him to find a deeper, truer life and love later.

Mr. Rosati leads Inspire Media Network which spreads kindness.  He began this non-profit after his diagnosis of Lou Gehrig’s Disease or ALS.  Chris chose not to wander the unknown path of his disease with fear but to live with hope and to spread positivity.  Alida felt honored that he took the moment to address her in the midst of his own large issues.  She was so moved by his story and approach to life that she offered to help Chris with his nonprofit and he accepted her services.

Alida took on a lot of responsibility in her two years with Inspire Media Network.  She created content, planned events, performed marketing tasks, and acted as the voice of the organization.  As Alida expanded her professional capabilities she nourished her soul.  After graduation from Elon University she accepted a job in Charlotte with an advertising agency. She enjoyed the work and appreciated the skills of her co-workers but at the end of the work day, her soul felt tired and flat instead of full.  She recognized that she needed to return to non-profit work to feel the soul-deep satisfaction that comes from creating positive impact on human lives.  That’s when she found Habitat Cabarrus.

Alida had previously volunteered with the Habitat for Humanity in Durham so she understood how Habitat helps families with a hand up, not a hand out.  She began Googling nonprofit jobs in the Charlotte area and the Habitat Cabarrus position almost magically appeared.  Soon after discovering the position, Alida joined the Habitat Cabarrus team with an eagerness to learn and support our efforts to build community.

Since joining the Habitat Cabarrus team last month, Alida has learned a lot about our programs and the community we serve.

“It is so amazing to see how many people and pieces go into building a habitat home, I truly had no idea before I started. My favorite moment so far has been meeting the families and watching them interact. It is a true community that Habitat has built for them; one that is supportive, loving and inspiring and shows that getting a new home is nothing short of extraordinary.”

We are thrilled to have Alida on our team at Habitat Cabarrus and look forward to working with her as we begin our first build of 2017 – the Collegiate Challenge Build sponsored by Publix.  If you would like to volunteer with Habitat Cabarrus, you can contact Alida at azimmerman@habitatcabarrus.org.

Posted by HabitatCabarrus at 4:56 PM